This year tickets will be free for everyone, audience members are invited to bring item(s) of food or to make a money donation to Cardiff Food Bank.Join us for an informal concert followed by drinks, mince pies and yule log!
The concert will include Shelley Fairplay”s harp students of all ages and abilities:
To guarantee your seat please reserve your tickets in advance by contacting Shelley Fairplay (see details below), tickets are limited to 4 per person in advance. Any left over tickets will be available on the door from 7.10pm, doors to the concert space will open at 7.15pm.On the evening there will be a collection point for food items/money donations for Cardiff Foodbank.
If you would like to add to the collection Radyr Methodist Church collect the following items: Tinned Sponge Puddings, Tinned Potatoes, Mash, Rice, Savory Rice, Sweets and/or chocolates for children.
To contact Harpist Shelley Fairplay for further details please visit: www.harpwales.com, email info@harpwales.com or phone: 07960 718663.

Our vision is to develop the use of traditional welsh tunes, keeping the melody close to its original form but fusing with other genres. So far, our music includes Jazz, Improvisation, Klezmer, Reggae, Samba and cross rhythms influenced by the harp music of Paraguay. What a combination! Our journey may take us anywhere, hence our name Crwydro Globe.

All our members are classically trained and our professional musical journeys have taken us along varied and diverse paths. This project brings all our music experiences together creating a unique collaboration.

To be confirmed – Percussionist

Lady Llanover Society – A day to play the harp!

I am really looking forward to teaching as part of this busy day of workshops and performing a short set at the end of the day!

There are sessions for complete beginners, improvers and more advanced.

Bring your own harp, or harps available on prior request.

at the Telynau Teifi Harp Weekend!

This weekend the heart of the Teifi Valley will resonate with the sounds of our National instrument of Wales during the Telynau Teifi Residential Harp Retreat.The event takes place in the beautiful surroundings of Waunifor which is located between the tiny Welsh villages of Maesycrugiau and Llanfighangel-Ar-Arth.

The harp weekend is for student harpists of all ages and abilities led by tutors Shelley Fairplay and Meinir Heulyn. On Saturday 17th October an evening of entertainment is open to the general public with harp concert “The Three Strands; Passion, Sorrow and Joy”.

For adult learners the weekend runs from the 16th to the 18th October. Many of the participants of the harp retreat will stay on site and play their harp into the night after the busy day of workshop, lessons and concerts during the day.

For under 18″s there is a jam-packed Saturday planned, the Telynau Teifi Harpathon Day, which culminates with an opportunity for everyone to perform to family and friends in a guest spot during the evening concert.

On the Saturday night Harpist Shelley Fairplay will perform “The Three Strands; Passion, Sorrow and Joy”.

This concert is a modern take on the traditional role of the harpist as minstrel and entertainer. Shelley has created a program that weaves a story of three strands from diverse musical styles including Celtic, Classical and Flamenco to Doctor Who and Starwars! The program includes the harp being played traditionally and also uses amplification, looper pedal, effect pedals and a wireless electric harp that Shelley wears to play.

To tie in with Shelley”s concert title the harp retreat has its very own “Three Strands” theme, the workshops are divided in to three categories; Playing with friends, The Contemporary Harpist and Classic Technique. The course content will be delivered by Shelley alongside Meinir Heylun who will join the weekend on the Saturday. Meinir is one of Wales” best known harpists at the forefront of the Welsh harp scene. She is a former principle harpist of the Welsh National Opera and was Head of Harp Studies at the Royal Welsh College of Music and Drama.

Allan Shires, founder of Telynau Teifi and acclaimed harp maker says: ‘We”re delighted to welcome Shelley and Meinir to West Wales for our harp weekend as mentors. It”s a great opportunity for makers and harpists at all levels to meet and share music and ideas together.’

Artistic Director Shelley Fairplay says; ‘I have a great drive, passion and enthusiasm for all aspects relating to the harp, I cannot wait to share this with the participants at the harp weekend in the delightful setting of Waunifor.’

To attend the Saturday night concert tickets are £10 for adults and under 16″s are invited to attend for free. Tickets can be

For harp students, there are spaces available to attend workshops as part of the Residential Harp Retreat (£95 for the three days) and the Harpathon Day (£40 for the day) a full timetable of events can be downloaded by clicking >>HERE<<, on www.harpweekend.co.uk or book by contacting Telynau Teifi on 0155936322 or info@telynauteifi.co.uk. 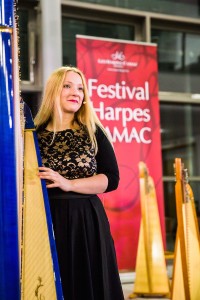 On the 3rd of October, Darth Vader, Doctor Who & James Bond walk down the aisle together in harpist Shelley Fairplay”s harp concert ‘The Three Strands,’ as part of the Camac Exeter Harp Weekend.

Shelley aims to show the harp to be an instrument that both harks back to an ancient tradition and is moving forwards with the times. This is reflected in “The Three Strands” concert where she performs a diverse range of musical styles using traditional harp-play techniques and also amplification, looper pedal, effect pedals and an amazing electro lever harp that she wears and walks around with!

The concert combines many music genres including Celtic, Classical and Flamenco to Doctor Who and Starwars. The program includes musical vignettes from her life, a suite of dance tunes that streams from Tchaikovsky to La Bamba called: ‘Tchaikovsky dances with friends’– and the show ends with her own interpretation of Deborah Henson Conants (a Grammy-nominated composer, performer and the world’s leading electric harpist, based in Boston, USA) fiery harp showcase, ‘Baroque Flamenco.’

Her ‘Wedding Remix’ sequence is a series of three motifs – based on real-life events – in which Shelley, as a wedding harpist, found creative ways to accommodate musical requests of the couples she played for – including the groom who wanted to pace the aisle to the Darth Vader Theme, the couple who fell in love to Dr. Who, and the man, whose name being ‘Bond’ wanted – you guessed it – the James Bond theme. She presents, in music and story, a perspective that only SHE could give us – in this case, her life and experience playing hundreds of weddings throughout the UK, with a personal mission of creating a deeply personalized musical experience for each couple.

‘Rally of the Riffs’ brings together pop and rock riffs on electro harp, as Shelley explains how the “riffs” or “hooks” from songs are often what really draw us in to a song, the piece uses a number of famous riffs including Greenday”s “Good riddance” and Elbow”s “One day like this” alongside her own original material. 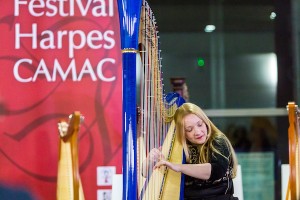 The name of the show, ‘The Three Strands’ refers to an age-old Celtic tale that each harper must master three musical strands in order to truly serve humanity.   The details of each strand differ in every story. In Shelley”s version, it”s the strands of passion, sorrow and joy. But in every tale, these strands are always played by a harpist, and they always encompass the human experience. The idea of these three strands really connects with Shelley as expressing emotion through music and connecting with an audience is what performing is all about.

Shelley explains that this is a tradition that”s not about “traditional music,” but a tradition of expression. Exploring this through the harp, every musician can create a completely unique style.

If you”re anywhere near Exeter on the weekend of the 3rd/4th October come along to catch her show at 7pm on Saturday 3rd of October at Exeter School Music Department. Tickets available by calling 029 2062 0900 or online via this link. It is part of an entire weekend of events at the Camac Harp Weekend where harpists are travelling from across the UK to participate in workshops, master classes and concerts. The full program of events is available via: www.camacharps.co.uk.