To purchase the CD please visit this link:

To download the sheet music for Bryn Melyn from the show (for harp, a simplified solo version)please click here: >>Bryn Melyn<<

Throughout generations tales have been told of three musical strands. The details differ in each story, but they”re always played by a harpist, and they always encompass the human experience. This is a tradition that”s not about “traditional music”, but a tradition of expression. Exploring this through the harp, every musician can create a completely unique style.

Following its launch at the National Botanic Garden of Wales in July 2014 and five shows in February 2015, Cardiff based harpist Shelley Fairplay is performing and booking dates for further performances this autumn. The concert includes the use of a gold electric harp that Shelley wears to play, a looper pedal, effects pedals and an amplified 47 string pedal harp.

The program weaves a story of three strands from diverse musical styles including Celtic, Classical and Flamenco to Doctor Who and Starwars! The program includes the harp being played traditionally but also uses amplification, looper pedal, effect pedals and a harp that Shelley wears and walks around with as part of the concert.

Her next CD, which is based on the concert ‘The Three Stands; Passion, Sorrow and Joy’ will be released in June 2015. 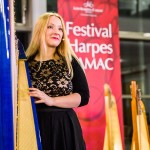 The premise of the Three Strands

Throughout generations tales have been told of three musical strands (or ‘Nobel Strains’) that a harpist should master in order to communicate to their audiences. The details differ in each story, but they are always about human experience.

The three strands/strains are generally detailed as the goltrai (the strain of weeping), the geantrai (the strain of happiness), and the suantrai (the strain of sleep). In many tales these powerful emotions played on the harp are used to avert disaster or end conflict, such as the harp being played to lull enemies to sleep (so their victims can bolt for freedom), or make warriors laugh and dance with such merriment that they cannot continue to battle!

The idea of these three strains really connects with Shelley as expressing emotion through music and connecting with an audience is what performing is all about. You will notice that she has exchanged the strand of sleep for the strand of passion – as is the right of minstrel (and is great fun to musically explore)!

Concert tickets for the next Three Strands Concert or if you have any questions regarding this event please email Shelley Fairplay via email address: info@harpwales.com. 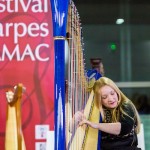 “Shelley Fairplay brings a new dimension to harp concerts. Her Three Strands Concert combines the traditional with the modern and is a truly unique evening that will appeal to harpists and non-harpists alike. A fun and ingenious look at the three strands – passion, sorrow and joy – Shelley presents a full-length concert full of diversity and a very personal look at the everyday events she encounters in her working life. Playing on several different harps during the concert it is a visual spectacular as well as a joy to listen to. Shelley”s natural, happy personality comes across as she talks the audience through her musical journey and the audience were on their feet by the end.’ – Elen Vining, Camac UK

‘A performance which was a complete show and had the audience spellbound from start to finish.‘ Professional Harpist and Teacher,  Audience February 2015

‘Congratulations on a wonderful performance. Your communication with the audience is amazing and it all looked so effortless.’ Audience Member February 2015

“I feel strongly that I need to make comment on the performance. Not just the performance, the whole package. It was so well put together, staging, other players, order of play, you’re own music, the scripting. You came over fantastically.  Very Talented lady and I was honoured to be there at a 10 out of 10 performance. Please keep me informed as to any other gigs.’ Audience Member February 2015

“I have always loved the harp but have never heard it played like you played it tonight. One word springs to mind to describe it WOW!. Thank you, it was a wonderful night of music and I feel very privileged to have been in the audience of someone so talented. I shall wax lyrical about your performance to everyone I know and look forward to your next concert.’  Audience Member February 2015

“Your concert was a real treat, enjoyed and appreciated by us all.  It was so different, it was innovative and a means of bringing even us into the digital age.‘ Audience February 2015

“Shelley is reliable, organised and professional in her appoach. Her concert preperation is painstaking, ensuring a polished performance and excellent sound quality. She is a joy to work with and her enthusiasm is infectious. Her drive and determination through the whole process from organising the concert to the evening itself were remarkable and I look forward to working with her again in the very near future.’ Telynau Vining Cyf, Organiser of the Cardiff Camac Harp Event, 7-8 February 2015